According to a family history [1], John was instrumental in providing the land and building the parsonage for the first pastor, a requisite for establishing a new town.   His father and grandfather arrived in Connecticut in 1635 and were active leaders in Wethersfield, just across the Connecticut River.  John Kilbourn is buried at the Glastonbury Green Cemetery.

What makes this story special to our family is that my wife, Ruth, grew up just 10 miles southwest of Glastonbury in Middletown.   Until recently, however, she had no idea that one of her ancestors (her 7th great grandfather) had lived so near.  As we have traced her family history, her line goes to Greenville, Maine where Fred Templeton and Angie Stiles were married.  Angie was born in Amherst, Nova Scotia, where our story ended until the last few years.

What we discovered in 2004 was that the Stiles family, along with several of Angie’s other ancestors, were New England Planters, a group of 8,000 people from Connecticut, Massachusetts and Rhode Island who moved to Nova Scotia before the Revolution to claim offers of free land from the British.   After expelling the French-speaking Acadians, they were desperate for farmers to settle the lands.

A large group of these New England Planters came from the area around Hebron and Lebanon, Connecticut, just 15-20 miles east of Glastonbury.  Among these were Nathan Stiles, Jr. and Kesiah Kilbourne, the great granddaughter of John. 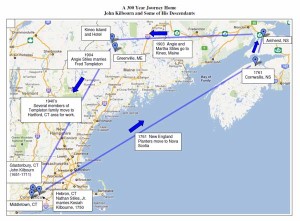 The map outlines the chapters in this 300 year story.  As we learn more and more about the stories of vision, courage and struggles of our ancestors, I appreciate how deeply indebted we are to them in so many ways.

Click here for a larger view of the map.

1)  Kilbourn, Payne Kenyon, “The Family Memorial: a History and Genealogy of the Kilbourn family in the United States and Canada from the Year 1635 to the Present Time”, Hartford, Connecticut, Brown and Parsons, 1845 as accessed on Google Books.