Today the weather was perfect as we took Ruth’s mother, Ruth Templeton Rollason, back to Kineo, an island on Moosehead Lake in Maine where she lived all of her childhood summers.  The shuttle captain loaned us his golf cart so that we could see the island.  We had the best guide – Ruth’s mom – who reminisced about her 17 summers here.

Kineo was a destination resort from the 1850’s until the 1930’s.  In 1903 young Angie Stiles and her sister Martha came from Amherst, Nova Scotia to work at the Kineo Resort.   Fred Templeton was a guide for the guests who wanted to hunt and fish.  He also looked after the boats for families who summered here.

A year later Fred and Angie married in Greenville where they made their winter home.  When school was out, Fred and Angie took their family to Kineo for the summer. 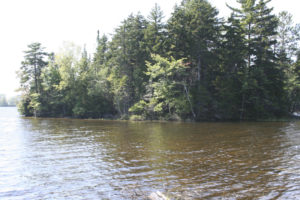 Fred leased land on a small island where he built a modest summer cabin for his family.

The resort is long gone.  Today there is a public golf course, a state park, and many beautiful summer homes.