– Looking for the Rest of Her Story

We are missing 53 years of the story of Ruth’s great grandmother.  Can we fill in some of the blanks? For our family there are large gaps in what we know about Emma (Emily) Sears.   Known to the Templeton family as Emily, she was born to William Sears and Edith Kirk on 12 February 1856 in Monson, Piscataquis, Maine.   On 29 June 1873 she married John Frank Templeton in Guilford, Piscataquis, Maine.   They had two children, Herman Orman Templeton, born 14 May 1874, and Fred Frank Templeton, b. 15 Feb 1876.   Both children were born in Willimantic, Piscataquis, Maine.   When Herman was only 5 and Fred 3, their father, John Frank died, leaving Emily a widow at the age of 23. The next part of Emily’s story is not known to the Templeton family.  What we do know is that shortly after his father’s death Fred went to live with John Frank’s brother, Enoch Templeton and his new bride, Calista Ridley.  Hermon went to live with Calista’s mother and father, Joseph and Mary (Robbins) Ridley.  To the best of our knowledge the Templeton family had little, if any, further contact with Emily.   There is a family story that at some point Emily tried to make contact, but that these overtures were rebuffed by Calista.  Calista remained a part of the Fred Templeton household until her death in 1949. 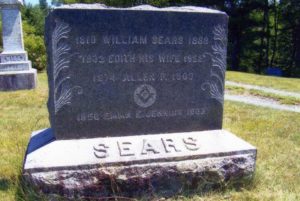 Family notes passed down say only that Emily later married a man named “Jenkins,” that she died in 1932 and is buried with her parents at Riverside Cemetery in Willimantic, Maine.  Indeed a tombstone at the cemetery confirms that “Emma Jenkins” 1856-1932 is buried with William and Edith. A search of records at the Maine State Archives in Augusta, Maine produced a record of death for Emma E Jenkins.  Emma died on 24 August 1932 in Guilford, Piscataquis, Maine, where she had been a resident for 2 weeks.  Her previous residence was Bangor, Penobscot, Maine.   The record stated her parents as William Sears and Edith Kirk.   Her marital status is listed as “widow”. 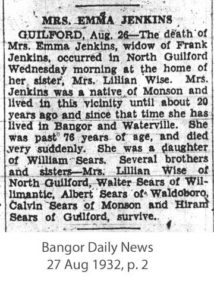 A search of the Bangor Daily News for 27 August 1932 produced an obituary for Emma Jenkins.  It states that she was the widow of Frank Jenkins.

She died at the home of her sister, Lillian Wise; that she was a native of Monson; that she previously lived in Bangor and Waterville. The big question:  what more can we learn about Emily’s story during the 53 years following the death of John Frank Templeton?  Additional pieces of the puzzle:  Do they fit and how?

Check out the Social Security application for Harry Carl to see if I can find any other clues.    Based on that information continue looking for more information about him and any family.  (See what I found on the SS Application at this link.   Harry Carl was a brother to Fred and Hermon!)

Explore other Sears family lines, especially the family of Lillian Wise to see if there are any clues, or researchers who may have information.