On July 19, 1836, 180 years ago today, a young Peter Geib, his wife Elizabet, along with her parents, Valentin and Margaretha Keller, arrived in New York City from Le Havre, France aboard the ship “Baltimore.” Also on the passenger list was a one year old child, Margaretha.  Peter and Elizabet, married in 1834 in Hohenollen, Pfalz, Germany, are my 2nd great grandparents. (view passenger list) 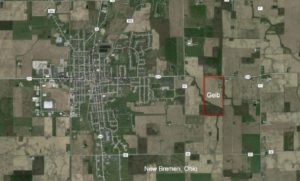 From New York the family traveled to west-central Ohio and settled in a newly formed German farming community of New Bremen in what is now Auglaize County.   Just 16 months after their arrival, on November 29, 1837, Peter Geib purchased 40 acres of land just east of town.  Within the next 10 years Peter sold this land and purchased 80 acres in the same section, as shown on this map. 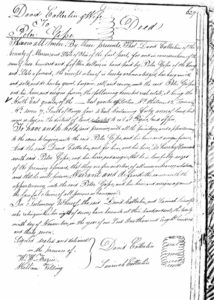 During a recent trip to Ohio I discovered the 1837 deed.   Since Auglaize County was not formed until 1848, I had to go to the court house in Mercer County (Celina) to do the early land research.   (You can view a larger PDF copy of the deed here.)

While I was in New Bremen I visited the preserved section of the old Miami-Erie Canal which connected the Ohio River at Cincinnati to Lake Erie.   While I do not know how the Geib family traveled their final miles to New Bremen, I read that many of the early German settlers to that area traveled up the canal from Cincinnati as far as they could go, and finished the trip to New Bremen by wagon.

The canal did not reach New Bremen until 1845.  Click on the picture of the canal to read more.