On a sunny August Sunday afternoon in 2008, Ruth and I visited a home first built by Ruth’s 7thgreat-grandfather, Job Lane (1689-1762). Located on the Old North Road, just north of Bedford,

Massachusetts, the home was built by Job Lane for his bride, Martha Ruggles at the time of their wedding in 1713. Maintained by the Bedford Historical Society, the home is open for tours one Sunday each month. The original home was from the front door to the right. The left portion of the home was built more than one hundred years later.

The property for the home was part of a larger 1,500 acre parcel which Job Lane’s grandfather, Job Lane (1620 – 1697) was given as payment for building a home for the grandson of Governor Winthrop in New London, CT in 1664. 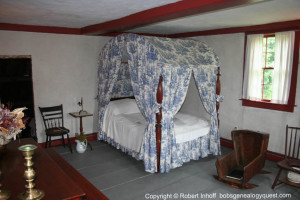 Job Lane’s son – Job Lane Jr. (1718-1796) was a private in the Bedford Company that marched to Concord on April 19, 1775 to defend against the attack by the British troops. Hit in the leg by a musket ball, Job Lane served only one day, but was a part of that historical step in our nation’s history. His wound left him crippled; some reports say that his leg was amputated. Fortunately he survived for another twenty-one years to see the fruits of the struggles – the birth of our new nation.