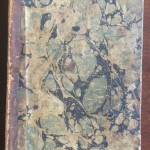 Tucked deep in the back of the drawer of John Wales Rollason’s desk was this very old book, about 15” tall by 6” wide.   Found again after his death in 2008, we discovered that the book is a store ledger from 1794-1795. The shop keeper was also a John Wales (1762-1823), the 3rd great grandfather of John Wales Rollason.   From a book “The History of North Bridgewater” written by Bradford Kingman in 1866 we read that John Wales had a store previously operated by Daniel Cary at the corner of Main and Belmont Streets in North Bridgewater (now Brockton) Massachusetts. (Kingman, p 386). 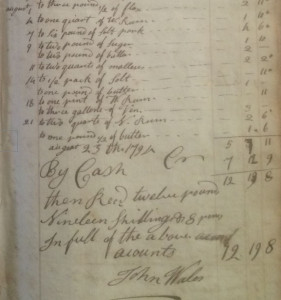 The ledger tracked details of purchases by customers.  Here we see part of the account for Benjamin Silvester and see purchases of salt pork, sugar, butter. “mallases”, salt, and lots of rum.   We can only imagine John Wales delight when he wrote “by cash then Recd twelve pound, Nineteen Shillings and 8 pence in full of the above accounts.”  Signed – John Wales.   What a treasure – to see his signature and to get a sense of this part of his life as a young man 33 years old. In that day shopkeepers were called traders for good reason.   Here we see that Enoch

Thayer paid on his account by trading lots of nails as well as “by two days work of a boy.”  Thomas Reynolds paid in part by “work one hand one yoke of oxen one day”, one dozen eggs, 17 ½ pounds of hay seed, et al. Interestingly this ledger covers the period in which John Wales, Jr. was born (18 March 1795).  As with so many families of this period, John Wales’ first wife, Mehitable Howard (1765-1791) died shortly after the birth of their second child, Anna Howard Wales.  John Wales then married Susanna Capen.  Susanna Wales was born in 1792, followed by John (1795) and finally Sally (1796).  In the context of John Wales’ store, we see that he was providing for a family with three children under 6 with a fourth on the way. John Wales grandson, also John Wales, continued the business tradition, becoming a very successful merchant in Boston in the late 1800’s.